Sturminster Newton’s Museum Society was formed in 1984, prompted by the death of Ray Rogers, former registrar of Sturminster Newton, a keen collector of archival material and a long-time campaigner for a museum.

The Museum was finally opened in the disused Chapel of the old Union Workhouse in Bath Road on 15th July 1989 by Miss Agnes Williams, the granddaughter of Montague Williams who built the chapel in 1890. 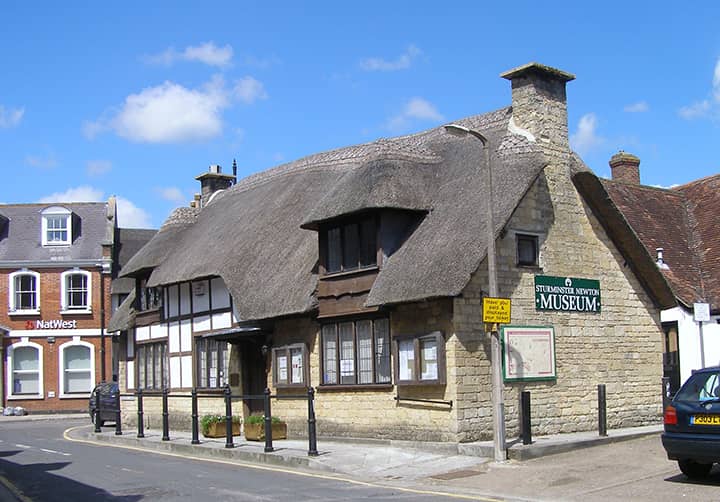 The Chapel suffered several problems as a Museum: it was on the outskirts of the town, had inadequate parking and very poor conservation conditions. It did not attract many visitors.

In 2007, the Trust (then, the Society) was able to, thanks to the generosity and enthusiasm of the community, raise sufficient funds to provide a deposit on a mortgage to purchase the current Museum building.

Subsequently, a grant from the Heritage Lottery Fund enabled the Trust to make some necessary internal alterations and refurbish the building as a museum. The new Museum opened to the public on August 1st 2008.

Upkeep of the Museum and Mill is expensive, and both are run thanks to our dedicated volunteers. If you are interested in helping our Trust with the upkeep of both these historic sites, you can securely donate online by clicking the PayPal button below.

Please help us improve our museum by taking a few minutes to fill in the survey:

The Trust has arranged talks by many knowledgable speakers for 2022 and 2023.

Interested in Sturminster Newton’s history and preserving the heritage of the town and its surrounding villages? Why not become a member of our Trust? The Trust is preserving the heritage of Sturminster Newton and its surrounding villages by collecting and conserving objects, written material and photographs relating to the social history of the area. The Museum houses a valuable collection of archival photographs and legacies from Sturminster’s once thriving cattle market, cheese making industry and railway, now all gone. Amongst our collection, we house census information from years 1841 to 1901, available for viewing by appointment.

The Museum also has items relating to the cottage industries of buttony and glove making and other past trades in the town. The Museum has inherited a large number of items related to the Dorset dialect poet Robert Young, who was both a contemporary and friend of William Barnes and Thomas Hardy.

Upstairs, in the ‘Railway Room’, there is a scale model of the former Sturminster Newton station (closed in 1966) and the adjacent livestock market. Our model is working and provides young visitors with much entertainment. We are also displaying memorabilia relevant to the staff and station and information on the Somerset & Dorset Railway in general.

Also permanently displayed is the earliest map we have of Sturminster Newton and a collection of crested china pots. The small pots are labelled Sturminster Newton and bear crests supposedly relating to the area. These pots were popular holiday souvenirs from the late 19th C until about 1930. Their popularity coincided with the development of the railways which made possible affordable travel for ordinary people to seaside resorts and elsewhere. The map is dated 1783. It was drawn for the estate manager for the Pitt Rivers family and lists all their tithed properties and tenants in Sturminster and the surrounding area. 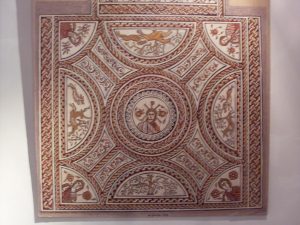 This exhibition is centred on the Roman heritage of Sturminster Newton and its surrounding area and includes the former villas at Shillingstone, Fifehead Neville and, particularly, Hinton St Mary. Emphasis is on the discovery of the famous mosaic, famous because it is the first depiction of Christ in mosaic form, found at Hinton in 1963. It later took pride of place at the British Museum; now no longer displayed in London but being returned to Dorchester sometime in the future.

A small hoard of post medieval coins discovered at Bagber is on display. Found by the Search and Recover Metal Detecting Club it has been designated “treasure” by the British Museum as it includes 16 silver and two gold coins, though almost all of them are rather worn suggesting that it was a “purse” hoard of used coins and not meant to be savings. They date from Mary I to James I.

For millennia humans have left behind debris associated with their life styles. Early “waste” consisted mainly of items that could not be re-used because they were either broken or inedible. The onset of industrialisation and cheaper production of most goods, particularly during the Victorian era, led to an increase in items being thrown away because they were empty rather than broken. The display features items, particularly ceramic and glass pots and bottles, thrown away by our Victorian forebears and earlier.  Effects of the later invention of plastics and the dramatic increase in the use of plastics in the last 70 years are illustrated, as are the consequences of plastic waste for our oceans and climate.

To accompany a grim looking dentist`s chair in our possession, which was used in Sturminster Newton in the 1930s, there is a small (mainly humorous) exhibition of the history of dentistry. 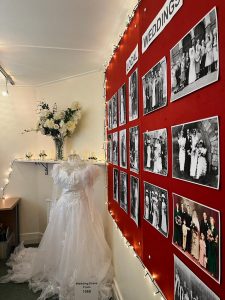 Browse photographers of happy couples from times gone by in Sturminster Newton, taken in some of the towns most iconic wedding venues. You might even spot someone you know! Visitors are invited to take a look at three stunning wedding dresses from the 1950s, 1970s and 1980s, reflecting fashions throughout the ages. This exhibition won’t be around for long- we advise visiting at your earliest convenience!

Finally, our display on the lives of Dorset poets Tomas Hardy, William Barnes and Robert Young, all of which have strong connections with Sturminster Newton, continues for another year. The display contains personal items belonging to Hardy and Barnes on loan from the County Museum. 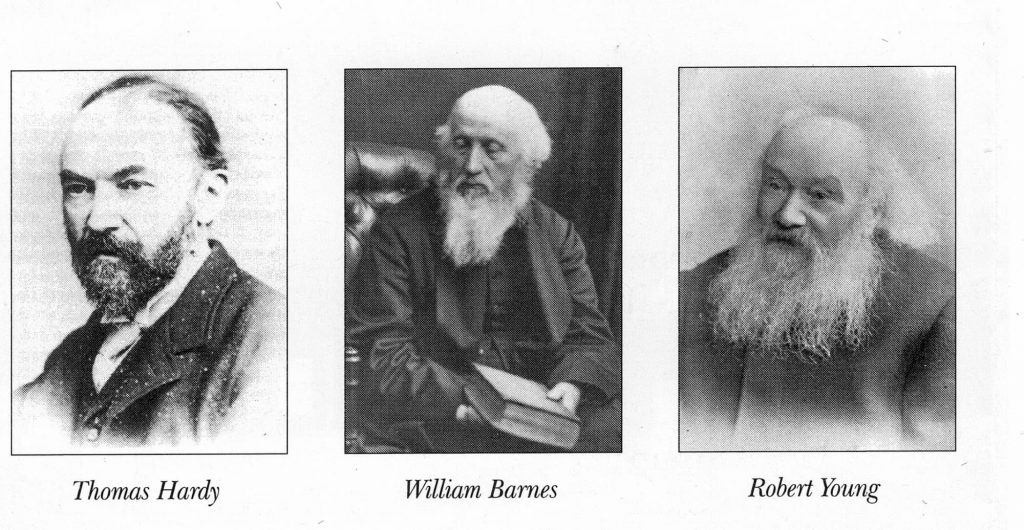 This video was made to accompany the Sturminster Literary Festival and is narrated by local writer and historian, Roger Guttridge. This film reflects the significance of the Town`s heritage and the importance of maintaining this heritage for the character of the Town.

Events at the Museum 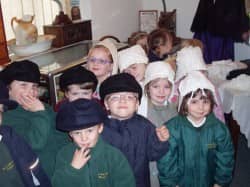 A visit by a local school, here they are dressed up in Victorian caps and bonnets. 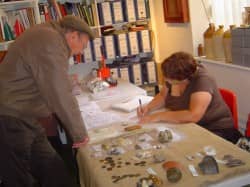 The county Finds Liaison Officer visits to identify finds brought in by children and adults. 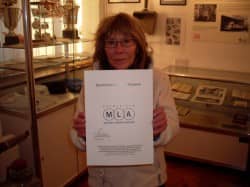 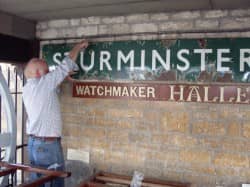 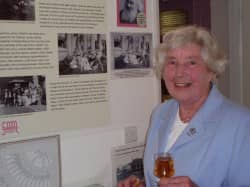 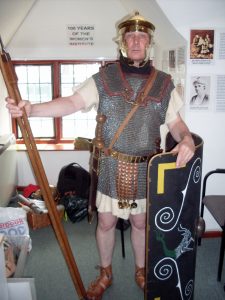 John Smith telling stories of the life of a Roman soldier in Britain
For Sturminster Newton Museum or Mill contact information, please visit the contact page.