Much of the later history of our area is well known and documented in books such as “STUR- The History of Sturminster Newton”. Earlier archaeological investigation ranges from the Neolithic period, c 3000 BC, until the late medieval, c 1500 AD. Although much of the latter is certain and evidence based, some of it is still open to interpretation.

The wider area has some outstanding prehistoric monuments, some of the international importance, some right on our doorstep. 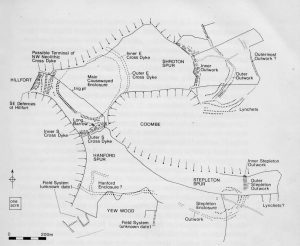 At Hambledon Hill, earliest occupation was in the Neolithic when a pair of causewayed enclosures were dug at the top of the hill, one smaller than the other. They were linked by a bank and ditch running northwest–southeast. 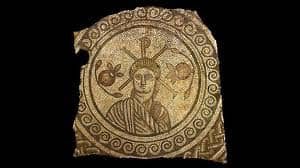 There is evidence of Roman occupation all round Sturminster Newton with major villa sites at Hinton St Mary, Fifehead Neville, Iwerne Minster and Shillingstone and a Roman camp at Hambledon Hill.

Photo: Christian iconography in the 4th century mosaic at Hinton St Mary. The mosaic is owned by the British Museum. 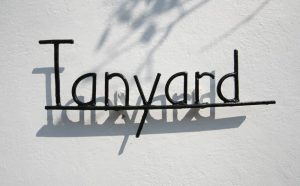 The dark ages. There is little documentary evidence for the events in this period but recent archaeology supports evidence for a Saxon minster centred around St Mary’s Church in Sturminster Newton.

Photo: Clues to a very early period are still evident in place and property names such as this and the adjacent Ham(me) Gate. 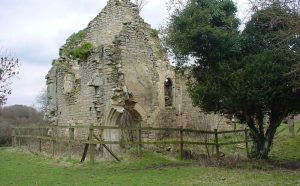 The Norman Conquest bought not only Domesday but also saw the expansion of the Monasteries, The Monastic influence of Glastonbury and Shaftesbury Abbeys was a major driver behind a reorganisation of the landscape in this area.

Photo: Remains of the mid-14th century manor built in Newton by the abbots of Glastonbury. 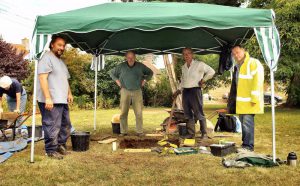 The Sturminster Newton Heritage Trust hosted and participated in a community archaeological project in 2010 in and around an area thought to represent the scope of a Saxon minster in the town. Many local people got involved and the project made a substantial contribution to the archaeology of the area.

Photo: A community archaeology project in 2010-11 excavated one metre square test pits in and around the Minster complex.

Upkeep of the Museum and Mill is expensive, and both are run thanks to our dedicated volunteers. If you are interested in helping our Trust with the upkeep of both these historic sites, you can securely donate online by clicking the PayPal button below.

Please help us improve our museum by taking a few minutes to fill in the survey:

The Trust has arranged talks by many knowledgable speakers for 2022 and 2023.

Interested in Sturminster Newton’s history and preserving the heritage of the town and its surrounding villages? Why not become a member of our Trust?